The word “Crypt” comes from a Greek word meaning “hide, conceal, or secrete” and thus has come to mean a vault, cave, or other place of underground concealment. The Cryptic degrees are centred on stories involving a vault or crypt where certain treasures were hidden beneath King Solomon’s Temple in Jerusalem for very specific purposes. Rob Morris, a very influential Mason in the 1800s, first called them “Cryptic”, a term coined by Bacon in the 1600s to mean “hidden” (as in “encrypted”).

In 1870, a move to introduce the Cryptic Rite into England roused the interest of the fraternity including many influential masons who had encountered the Rite either in USA or in Scotland. In the discussions that followed, it emerged that in USA the essential preliminary to the Cryptic rite was the degree of Most Excellent Master; but whereas the Cryptic degrees proper (Royal Master, Select Master, Super Excellent Master) were controlled by the State Grand Councils, that of MEM was under the State Grand R A Chapters. Hence in order to introduce the rite into England, it was necessary to apply to two sovereign bodies for dispensations. Those having been secured, four Councils were constituted; and it was then resolved to form these four councils into a Sovereign body: Grand Council was founded in 1873. There were four degrees in the original English Rite, the MEM being included as the 1st degree to bring things in line with the American Rite. The order in which the degrees were taken was: MEM, RM, SM, and SEM. In 1989, when revising the rubric for the new edition of the Ritual, it was decided also to revise the order in which the degrees are taken to make them follow the sequence of Old Testament history viz. SM, RM, MEM, SEM.

At its inception into Scotland, their Rite had also included the MEM degree but, in 1915, this was dropped in favour of the Excellent Master degree, which was not worked in English Cryptic Masonry until recently. This, which at first raised a difficulty when inter-visiting took place, was solved in 1959 by an agreement between the two Constitutions that a Scottish Cryptic mason could witness the MEM degree after being “heled” i.e. taking a short obligation. Similarly an English Cryptic mason can witness an EM degree in analogous circumstances, but a Cryptic mason from one Constitution who wishes to join a Council in the other must take the appropriate “missing” degree. The first Book of Constitutions records that the early Councils originally met in Red Lion Square in London, later moving to what is now the Connaught Rooms, and various other temporary homes, before finally settling down in the present Mark Masons’ Hall at 86 St. James Street, London SW1A 1PL. The Grand Council shares the services there of a salaried Secretariat with some seven other sovereign side degrees. The first Book of Constitutions (published in 1874) also prescribed regalia, but this was not enforced: Companions seem to have contented themselves with the Cryptic Jewel worn with Mark regalia. It was not until 1930 that the wearing of proper regalia was urged upon members. The Order made a very slow start but has gradually increased in strength and number of Councils. In 1889, the membership was 400 in 14 Councils; in 1914 only 17 councils were actively at work; but in 1967 its strength stood at 83 Councils and now there are over 300. 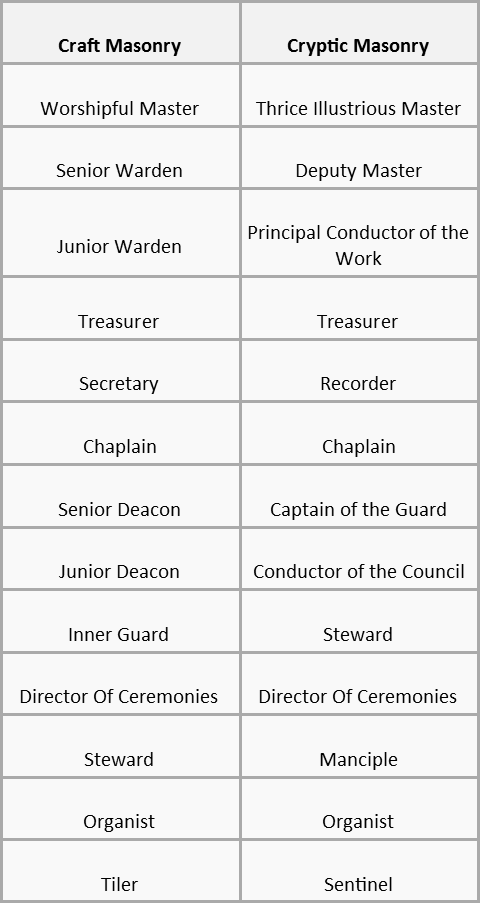